Contemplation for a New Year 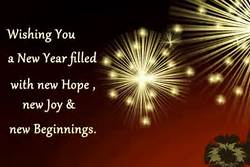 The beginning of a New Year provides opportunity to consider at the outset of the year what we hope the year will hold for us, recognizing that what the year holds for us will be affected significantly by what we put into the year.

In January, the year is young, so it is worth considering something Sydney J. Harris once wrote to young people.  He said, “Young people searching for their ‘real self’ must learn that the real self is not something one finds as much as it is something one makes; and it is one’s daily actions that shape the inner personality far more permanently than any amount of introspection or intellection.”  Likewise, what we get out of this year will not be so much what we find but what we make through our daily actions.  So what will you make of this year through your daily actions?

Mark Buchanan put it this way: “Wise people ask, Does the path I’m walking lead to a place I want to go?  If I keep heading this way, will I like where I arrive?”  Where do you want to end up at the close of the year?  Will the way you are “heading” get you where you want to arrive?

When I contemplate where I want to end up, I am stirred by the apostle Paul’s words in Colossians 3:12-14: “Therefore, as God’s chosen people, holy and dearly loved, clothe yourselves with compassion, kindness, humility, gentleness and patience.  Bear with each other and forgive whatever grievances you may have against one another.  Forgive as the Lord forgave you.  And over all these virtues put on love, which binds them all together in perfect unity.”

I want to end this year more like the kind of person Paul describes here.  What will it take from me during the year to get there?

Most of all, I will need to love.

Geoff Gorsuch remarks, “The question to ask at the end of life’s race [or at the end of the year] is not so much ‘What have I accomplished?’ but “Whom have I loved, and how courageously?”  The key to becoming the kind of person Paul describes in Colossians 3:12-14 is not to accomplish more but to love more courageously.  How might I do that this year?

What makes for contentment?

What makes for contentment in life?

Jesus addresses this subject in the first act of public teaching that Matthew records in his gospel.  But he offers a far different perspective than the people of His day or the people of our day would expect.

Calvin Miller once shared a description of what many people think leads to happiness:

“A beggar asked a millionaire, ‘How many more dollars would it take to make you truly happy?’  The millionaire, reaching his gnarled hands into the beggar’s cup, replied, ‘Only one more!’”

We tend to think that if we could get just a little bit more we would be happy.  But it never works, for there is always “a bit more” to be gotten to make us happy.

J.B. Phillips has offered this idea about what makes for happiness:

That’s the common perspective as to what makes for happiness.  But it’s not the perspective Jesus takes.

Dr. Donald Hagner points out, “Surprisingly, the Bible doesn’t seem very interested in happiness.  English translations hardly employ the words ‘happy’ or ‘happiness.’  A perfectly good Greek word, eudaimonia, meaning ‘happiness,’ was available, but is not used by a single New Testament writer.  Another Greek word, one that seems indispensable to the description of Hollywood happiness is hedone, ‘pleasure.’  This word occurs in the New Testament only a few times, always negatively.  Luke 8:14, for example, refers to seeds that are ‘choked by the cares and riches and pleasures of life.’  Happiness, in the sense that it is usually understood, apparently seems from the New Testament perspective to be altogether too much of a preoccupation with the self.

“The Bible has another vocabulary, a more elevated one, for words such as ‘blessedness’ and ‘joy.’  While in the Old Testament blessedness is sometimes related to material matters, in the main it designates as blessed the person who knows and fears God, who considers the poor, and does justice and righteousness.  Blessedness is for the most part directed away from the self.  Blessedness is the product of what God has done and our participation in that.”

Jesus’ experience as a refugee

One of the deep struggles Jesus experienced—at a very young age—was the struggle of fleeing for his life and living in a foreign country as a refugee.

Franz claims that Herod “became extremely paranoid in the last four years of his life (8-4 B.C.).”  In 7 B.C., he had 300 military leaders executed.  Later he had several Pharisees executed after he learned that they predicted to the wife of his younger brother Pheroras that “by God’s decree Herod’s throne would be taken from him…and the royal power would fall to her and Pheroras and to any children they might have.”

As Franz points out, “With prophecies like these circulating within his kingdom, is it any wonder Herod wanted to eliminate Jesus when the wise men revealed the new ‘king of the Jews’ had been born?”

So, with Jesus’ life threatened, Joseph, Mary, and Jesus escaped to Egypt.

In the January 1, 2017 issue of Biblical Archaeology, Joan Taylor argues that Joseph, Mary, and Jesus were not alone in their flight to Egypt.  She asserts, “Many epitaphs and inscriptions, as well as historical sources, testify to a thriving Jewish expatriate community in Egypt made up of earlier refugees that could be joined by others.  However, just like today, new refugees were not welcome.  A letter of the emperor Claudius, written in 41 C.E., states that Jews in Alexandria lived in ‘a city not their own’ in which they were ‘not to bring in or invite Jews who sail down to Alexandria from Syria.’”

Taylor adds, “For new refugees, as anywhere, life would have been very hard.  The first-century Jewish philosopher Philo of Alexandria tells us of the consequences of poverty, which could result in enslavement.   Presumably, Jewish charity and voluntary giving through the synagogue would have helped a struggling refugee family, but they would also have been reliant on the kindness of strangers.”

William Murray sums it up well: “Jesus, as a small boy, knew the pain of fleeing a bloody land where the innocent were slaughtered.  He saw the terror in His mother’s eyes as his family fled at night, hurriedly and quietly under the cover of darkness for fear of discovery.  A death sentence had been issued by Herod the Great for him and every male child under the age of two.”

Through His own experience, Jesus knew well the pain and fear and struggles of a family that has to flee for their lives to another nation that does not welcome them warmly but who resented their presence. 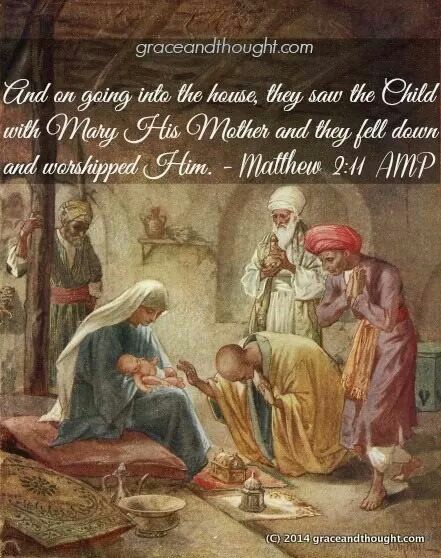 In the first, Herod’s desire to “worship” Jesus is actually an attempt to capture Jesus, so as to do with Jesus what he wants to do with Him, to make use of Jesus for Herod’s own plans.  That’s the essence of false worship.

It’s what we are guilty of when we use the Bible as a means of justifying our opinions or validating our personal preferences rather than letting God direct our hearts and our minds and our lives through His Word.

It’s what we are guilty of when we claim the grace of God to excuse our sins rather than confessing our sins and seeking God’s help in turning away from them.

It’s what we are guilty of when we take advantage of the various benefits of our faith without making any of the sacrifices or commitments of our faith, when we demand God’s blessings on our lives while neglecting God’s call to us to be faithful, to obey Him, and to serve others in love.

Such false worship inevitably ends up where Herod’s scheme ends up: With the attempted annihilation of Jesus.

But when the Magi come to Jesus we find a picture true worship.

It begins with the Magi bowing down.  True worship involves bowing ourselves before God, recognizing that God is higher than I, and submitting myself to being under His rule.

True love involves adoration, falling in love with the person of God with the whole of our being!

Then the Magi presented to Jesus their gifts of gold, frankincense and myrrh. 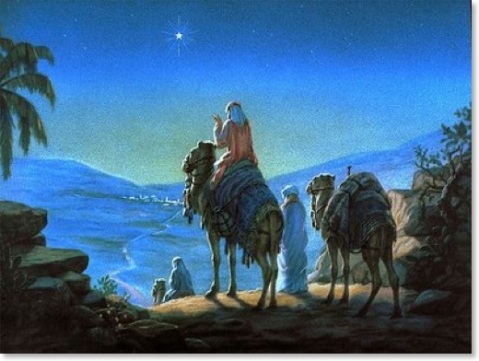 One of the things that amazes and delights me about the Biblical Christmas story is how God used a variety of means to bring diverse people to Jesus.  He used an unusual star (or planet) in the sky to bring the Magi to Jerusalem, then the recorded words of a prophet to bring them to Bethlehem.  He used angels in the night sky to bring shepherds to the manger.  He used the nudging of the Holy Spirit to bring Simeon and Anna to recognize Jesus at His dedication in the temple.

It strikes me that God never seems to tire of finding different ways to draw people to Himself!

In his book, Eternity in Their Hearts, Don Richardson tells the story of a spiritual leader among the Wa people of Burma named Pu Chan.  Many years ago Chan saddled a pony and told a couple of his disciples that the pony would lead them to a “white brother bearing the book of Siyeh, the True God.”  These disciples followed the pony along 200 miles of mountainous trails, into the city of Kengtung.  Then the pony “turned into the gate of a mission compound and headed straight for a well.”  When the disciples looked into the well, they saw no water, “only two clear blue eyes looking up at them out of a friendly, bearded white face.”  This “white brother” shared with them from his book, the Bible, the good news about the “True God.”  In this instance, God used a pony to draw people to Jesus.

Michael Carl shares a more recent story.  He writes, “‘I was in the desert alone, lost. As far as the horizon, there was nothing in sight but sand. I felt the sand on my bare feet. Then I saw something extraordinary. In the midst of that barrenness, an immense wooden cross emerged from the earth, rising up with sand spilling from it back to earth.’

“So begins a dream narrative posted by Bosnian Muslim teenager Emina Emlonic. A dream about Jesus.  It continues: ‘I felt then a spectator in my own dream, and the sight of the cross gave me neither fear nor joy. But I was curious and began moving, almost floating, towards it, the most magnificent … thing I’d ever seen or imagined, and as I came closer to the cross, I suddenly saw a man walking toward me: a broad-shouldered, long-striding man, with a dark complexion, long hair, and wearing a white robe.  And just as suddenly I ceased to be a witness to my dream. I was in it, walking toward the man walking toward me. I knew him immediately. He was Jesus. Without knowing why, I fell to my knees. He stood over me and touched my face with his right hand.’”

In this instance, God used a dream to draw a person to Jesus.

In my own life, it was the love and faith and integrity and courage I saw in Fran Watron amidst her struggles with rheumatoid arthritis that drew me to Jesus.  (And I would bet that for most people, it is seeing the character of Christ in someone they know and admire—like I saw it in Fran Watron—that most effectively draws people to Jesus.)

The God who so loved that world that He gave His only Son desires to draw all people to Jesus, and He keeps finding fresh ways to do so.