The Wedding God Longs for 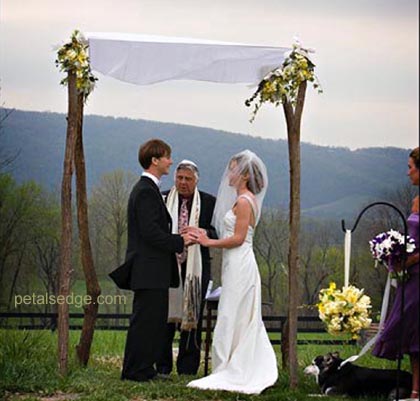 The second-to-last chapter of the Bible begins with a beautiful expression of God’s longing to welcome us into His everlasting love: “Then I saw a new heaven and a new earth, for the first heaven and the first earth had passed away, and there was no longer any sea.  I saw the Holy City, the new Jerusalem, coming down out of heaven from God, prepared as a bride beautifully dressed for her husband.”

This is a passage I have often shared at funerals—at the end of a person’s life—to declare the joy that awaits us in heaven as we come into the unending loving embrace of our God.  But here is what excites me the most: That sentiment (that expression of God’s longing for a marital-type-of-love with us) does not suddenly pop up out of nowhere at the end of the Bible.  It is also conveyed very early in Scripture.  We may not recognize it with our 21st century American eyes, but there is tremendous wedding imagery in the giving of the 10 Commandments.

In an article in The Jewish Woman, Esther Piekarski and Rishe Deitsch share, “The concept of marriage does not apply only between men and women in Judaism; our entire relationship with our Creator is considered a marriage.  Our wedding anniversary is the holiday of Shavuot, the day on which we received the Torah [the Law].  And just as a marriage should be continually renewed, so too, each and every year we once again relive the giving of the Torah, our marriage to G-d…. and we are taught that Mt. Sinai itself, the smallest and most humble of all the mountains, was held above our heads, symbolizing the wedding canopy, the chuppah.  When we received the Ten Commandments, the foundation of the Torah, this represented the giving of the marriage contract, the ketubah, representing our love, commitment, respect and responsibility within this relationship.”

An article in JewishJewels.org adds, “Fifty days after the Feast of Passover, we celebrate Shavuot, the Feast of Weeks…known also as Pentecost…. It is traditionally believed that the Israelites arrived at Mount Sinai fifty days after the Exodus, arriving at the mountain on the sixth day of the Hebrew month Sivan…. God gave His people the Law on this special Pilgrim Feast, earning it yet another name: Z’man Matan Torateinu, the Season of the Giving of the Law.  It is fascinating to note that the events of Acts Chapter 2 occur on the Feast of Shavuot.  The Holy Spirit was given on the exact day that the Law had been given.  Coincidence?  Absolutely not!  The giving of the Spirit made it possible for the Law to move from the outside (tablets of stone) to the inside (the human heart).”

Briefly stated, here are some of the images of a wedding that we find in Exodus 24:

One response to “The Wedding God Longs for”